Ryan Norris - Give the People What They Want 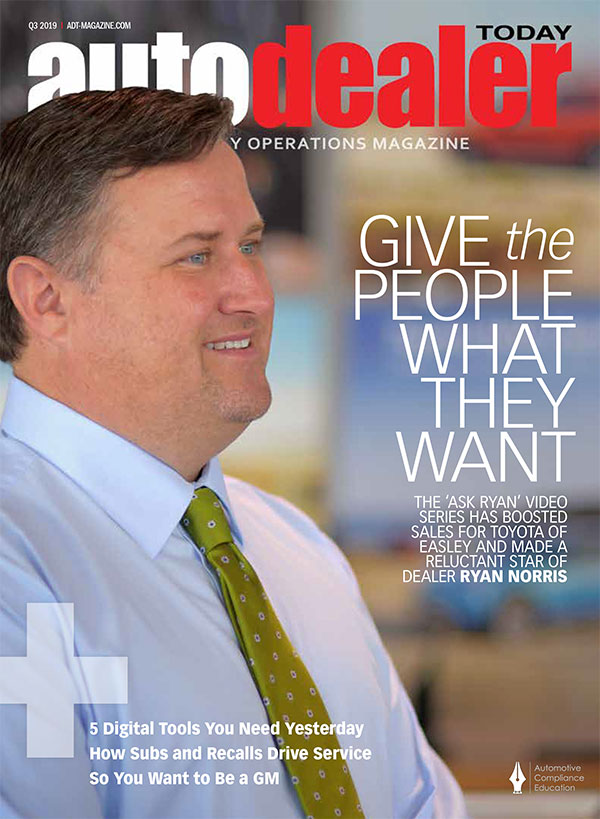 Ryan Norris and the Next Generation of On-Camera Dealers

Ryan Norris, co-owner of Toyota of Easley, knows the best way to boost sales: Stop talking about your store and talk about what the customer wants to know.

Norris grew up at the Upstate South Carolina Toyota store, which his dad, Tommy Norris, founded over 40 years ago. Ryan became co-owner in 2008, and although he was proud of the store's heritage, he couldn't help but wonder if its marketing strategy had kept up with the times.

Ryan Norris and Toyota of Easley (S.C.) have all but abandoned traditional advertising to focus on building an online library of videos inspired by customers, starring the dealer, and driving sales and service - often with no mention of buying a car.

How Were You Founded

We began as a digital agency in 2003, in a mere 1,700 square foot office in the heart of the Electric City. Getting Potratz Partners Advertising off the ground took dedication and resilience, as Paul Potratz pitched his business over and over, taking rejection in stride as potential clients could not fathom the idea of investing in digital. Turns out, he was on to something. The digital world has come a long way since 2003, and at Potratz we’re proud to say that since inception we’ve had creativity and marketing in our blood.

Do you offer Motion Graphics and Animation?

Yes, we do motion graphics and animation, we also offer time-lapse and explainer videos.

Do you have to come on location or shoot video to create a video pre-roll and TV commercial for my business?

No, we have thousands of hours in running footage or b-roll that would work for any business or production. Depending on the video you’re looking to have produced, we may not have to come on location, which would also save you money when we do the production.

What are your daily video fees?

A ballpark to have in mind – a small crew on location will cost approx. $2,790 for the day and $3,000 per produced minute. There are several variables that determine the exact cost e.g. your location, type of shoot, cast needed, set building needed, wardrobe needs and much more – to get an accurate proposal, call, email or text us to discuss your project’s details.

Do you have teleprompters?

Yes, we do have Teleprompters – and it’s our job to make whoever is on camera comfortable and confident.

Yes, we have a video studio and several sets throughout our 27,000 sq. ft. facility. We also have several partners that allow us access to shoot for no additional rental fees.

How long does it take to receive results back on the Facial Recognition Analytical Measurement Technology?

Generally, after your video has been produced your facial recognition analytical measurement report will be ready within 3-4 weeks.

I want to do video pre-roll on YouTube so can you create the video and also run the campaign.

Yes, we create video pre-roll for YouTube TruView everyday and yes not only can we run your campaign but build and entire video marketing funnel strategy as well.

Do you offer aerial or drone videography?

Yes, we do have a licensed drone pilot and videographer on staff.

Do you have spokespeople or actors that we can pick from?

Yes, we have talent that we can suggest and you can pick from. We have every lifestyle actor or actress to cover any type of video shoot you need.

Do you shoot HD video?

Yes, we shoot most everything in 4k, but offer 6k as well.

Do you shoot on-location in other States other than New York?

Yes, we travel extensively and if you are within 6 hours of drive time we drive our production vans. If your location is over 6 hours, we fly.

How long does it take for you to produce your video from concept to completion.

We are generally booked 6-8 weeks out. Once we begin your project the time varies greatly on the scope of your project. If it’s a TV or Video Pre-Roll and we have the footage in house we can have it completed within 72 hours. While an infomercial generally takes 2 weeks to produce.

How were you founded?

We began as a digital agency in 2003, in a mere 1,700 square foot office in the heart of the Electric City. Getting Potratz Partners Advertising off the ground took dedication and resilience, as Paul Potratz pitched his business over and over, taking rejection in stride as potential clients could not fathom the idea of investing in digital. Turns out, he was on to something. The digital world has come a long way since 2003, and at Potratz we’re proud to say that since inception we’ve had digital marketing in our blood.

How can I book you to speak at my event?

There a couple different ways to accomplish this:

Can I come to your office and train on location?

Of course! We welcome the opportunity to get to meet and work with any client face-to-face. We would be more than happy to hold trainings or meetings on location as need be.

Yes – initial consultations are complimentary, because these help us ensure both parties know what goals need to be accomplished in our partnership. We do however offer consulting services – if this is a service you are interested in there is a consultation fee associated, however the initial consultation call will still be free.

Why do I need a consultation?

Our first step is always a consultation – whether you are looking for a website, PPC, email marketing, video etc. we ask all of our potential clients to first schedule a consultation so we can get to know you and your goals. We build out each proposal custom – the consultation is the first step to getting you a robust and correct proposal.

What do I need for my consultation?

For your consultation you will need yourself as well as any key team members or decision makers on the call. You will also need to have your core business goals so we can lead you down the correct success path!

What are your prices and costs?

Prices and costs will differ based on our partners and clients. Part of what we love about our jobs is that every business and client is different. We build custom pricing based on your needs, business and budget.

What kind of clients do you work with?

We work with clients that are as passionate and excited as we are! We work with all industries and look for our clients to be more like “partners” or an extension of the Potratz family!

Where can I see some of your work?

Be sure to check out our extensive case studies to see some of our work and more importantly, the results we’ve helped our partners achieve.

How long does it take to get started?

Your onboarding time-line will differ depending on the product or service you are interested in. For example, a custom built website may take 6-8 weeks to launch, while a dynamic retargeting or social campaign could take as little as 2 weeks to launch. Each client will receive an estimate of their custom timeline post consultation call.

Where can I get free resources or downloads?

Are there any jobs available?

We are always on the hunt for amazing, passionate, entrepreneur-thinking talent. Check out our CAREERS page for the in. Job postings come and go, so be sure to check often!

How can I get more information?

Where are you located?

We are located in the heart of Schenectady, NY. Feel free to stop by and meet the team, as well as check out our in-house studio.